How to Use Contrast to Create Kick-Ass Clothing Combinations

The following is a guest article by Robert van Tongeren of Restart Your Style.

Are you struggling with how to combine your clothes properly?

Sure, you’ve collected a bunch of nice clothes, but when putting them together, you’re completely stumped. You just don’t know how to combine them into a kick-ass outfit.

You may have experimented with different clothing combinations, and you may have discovered you like some better than others.

But you don’t know why.

You may look for inspiration in magazines, look-books, or even just in the outfits of guys whose style you admire. You may even have tried to copy some of their looks, and again some worked better than others.

But you don’t know why.

And you don’t want to rely on outside sources for inspiration. You want to know how to combine clothes yourself. You want to peruse a store and pick combinations based on your own instinct.

You want to pick an outfit all by yourself, and still look sharp.

Well, today you’ll learn a secret that will help you do just that.

Ironically, when you do it right, your face should draw more attention than your clothes.

The point of dressing well, after all, is to make you look sharper. Not your outfit.

So you have to combine clothes to complement your face, but how?

How to Create Clothing Combinations That Complement Your Facial Features

To create clothing combinations that complement your face, you have to look at the contrast between your hair and your skin.

And then, you have to repeat that contrast level in your outfit.

So here’s what you do:

Stand in front of a mirror and look at your skin color and your hair color.

Are they close in tonality, do you see a stark contrast, or do you fall somewhere in between?

Step 2 – Score Yourself on the Contrast Scale

The contrast scale runs from one to nine; one being the lightest and nine being the darkest.

To determine your contrast level, you have to determine where your skin and hair fall on this scale. (Though you don’t need to be precise. Having a ballpark idea is fine.)

So let’s say your skin is about a two, and your hair’s about a nine. Then your contrast level is nine minus two, which is seven.

When you put together clothes, you want to mimic the contrast between your skin and hair.

But again, you don’t have to be too precise. You should only know which of the following contrast types you belong to:

And once you’ve determined your contrast type, combining clothes is a cinch. 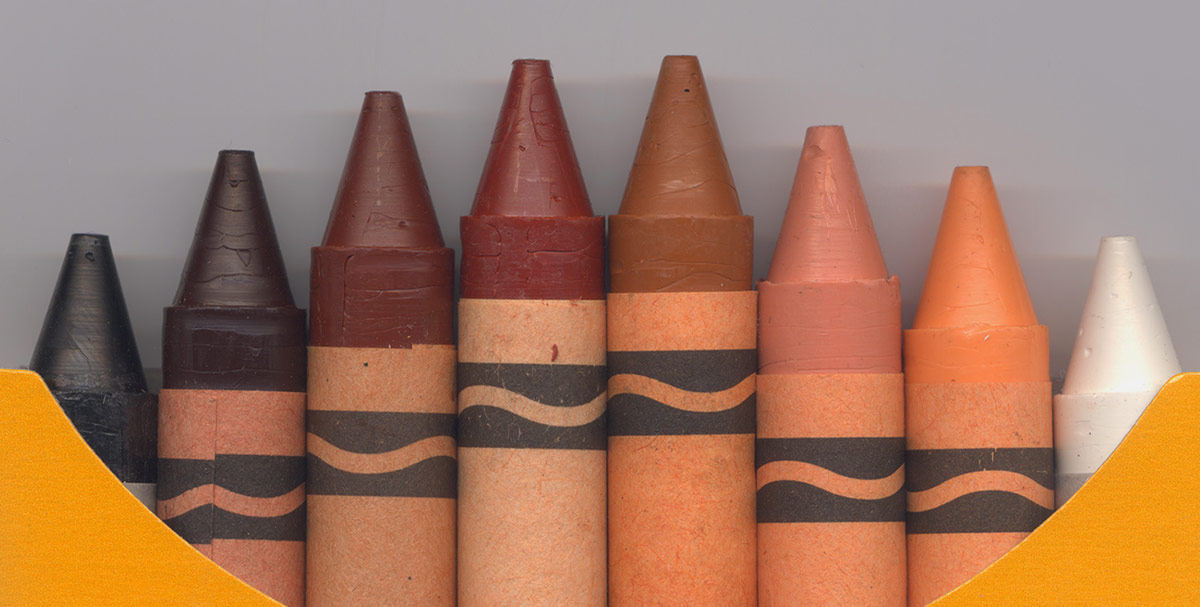 YOU’LL LOVE THIS ONE, TOO

Choose The Best Clothing Colors For Your Skin Tone

How to Dress for Your Contrast Type

The point of dressing well, after all, is to make you look sharper. Not your outfit.

Every contrast type has to combine their clothes in different ways to complement their facial features.

So let’s delve further into each contrast type, and see which combinations work best for you.

Don’t take my word for it. Compare for yourself: Going on your gut instinct, which of the following two cartoon dudes looks better?

The low level of contrast between the light-grey jacket and white underplay his natural features. I bet your gaze was instantly directed to the dude on the right.

(Side-note: You’ll also look great in items that have high-contrast within themselves, e.g. Boldly striped T-shirts or sweaters)

When you’re a low-contrast type, you want to avoid contrast in your outfits as much as possible.

Again, compare for yourself:

Now, on first viewing, you may decide the cartoon dude on the right still draws more attention. But it is, in fact, the contrasting jacket that draws attention to itself.

Try concentrating your gaze on the left dude’s eyes.

You should have no problem holding your gaze steady, and you’ll notice the jacket fading into the background.

You will notice the jacket trying to draw your eye downwards — as if the jacket is pushing itself into the foreground. Look long enough, and you’ll see the hair adopting the color of the skin, and the two blending into each other.

When you’re a low-contrast type, wearing a contrasting piece will overpower your look and draw attention away from your face. You don’t want that to happen.

Create low-contrast outfits by pairing light with light or dark with dark, and stick to analogous colors.

3. Experiment With Contrasts When You’re a Medium-Contrast Type

If you’re a medium-contrast type, you’re a lucky man. You have a lot of leeway.

You can move across the contrast scale more freely, as you’re much safer wearing clothes in both higher and lower contrasts, so experiment with both.

Most medium-contrast types lean one way or the other, so you need to try out different combinations, and see which you prefer. If you’re unsure, ask someone you trust for feedback.

But again, you have a lot of leeway, so you can pull off both high and low contrasts, or just stay happily in between.

The Notable Exception for the Contrast Rules

When you have dark skin and dark hair, you’d assume to be a low-level contrast, but you are actually the opposite.

Your hair and skin are closely matched, but since your eyes and teeth provide a high contrast against your dark skin, a high-contrast outfit will complement your smile.

Besides, you just can’t avoid creating contrast when you put almost any color against your dark skin.

So if you have dark skin and hair, approach your outfit choices as being a medium-to-high contrast type.

Try it Out for Yourself

This method of combining clothes is rarely discussed, and few guys know about it. Having only a basic understanding of it will put you well ahead of them.

So go stand in front of a mirror and determine what your contrast type is. Then, go through your closet and experiment with creating different contrast levels in your outfits.

And when you’re armed with the knowledge of which contrast type you belong to, you’ll have no problem creating looks that kick ass.

You’ll know exactly what to do to look super-sharp.