Are These Earbuds Better Than AirPods? (Hands-On Review Of The Status Audio Between Pro) by Karlton Miko Tyack  |  in Lifestyle

Launched in 2014, New York-based Status Audio prides itself on understated design and resistance to trends, with a full focus on sound quality. If you’re considering a new pair of earbuds, you’re gonna want to check out the Between Pro. We’ll be doing a hands-on review in this article, so read on!

From its style and fit, sound quality and functions, we’ve conducted a hands-on review of these unique earbuds.

These guys are coming at us with one of the latest chipsets, Bluetooth 5.2, along with triple drivers—more on those later. Here’s everything you need to know!

The Bottom Line, Up Front

Because these earbuds have a separate respective driver for the bass, the middle, and the treble, the Status Audio Between Pro earbuds offer clear, unclouded sound in a wide range of volumes.

Unlike with dual-driver earbuds, they don’t lose midrange details, fully delivering on their promise of sound quality, all in a no-frills but distinct design. 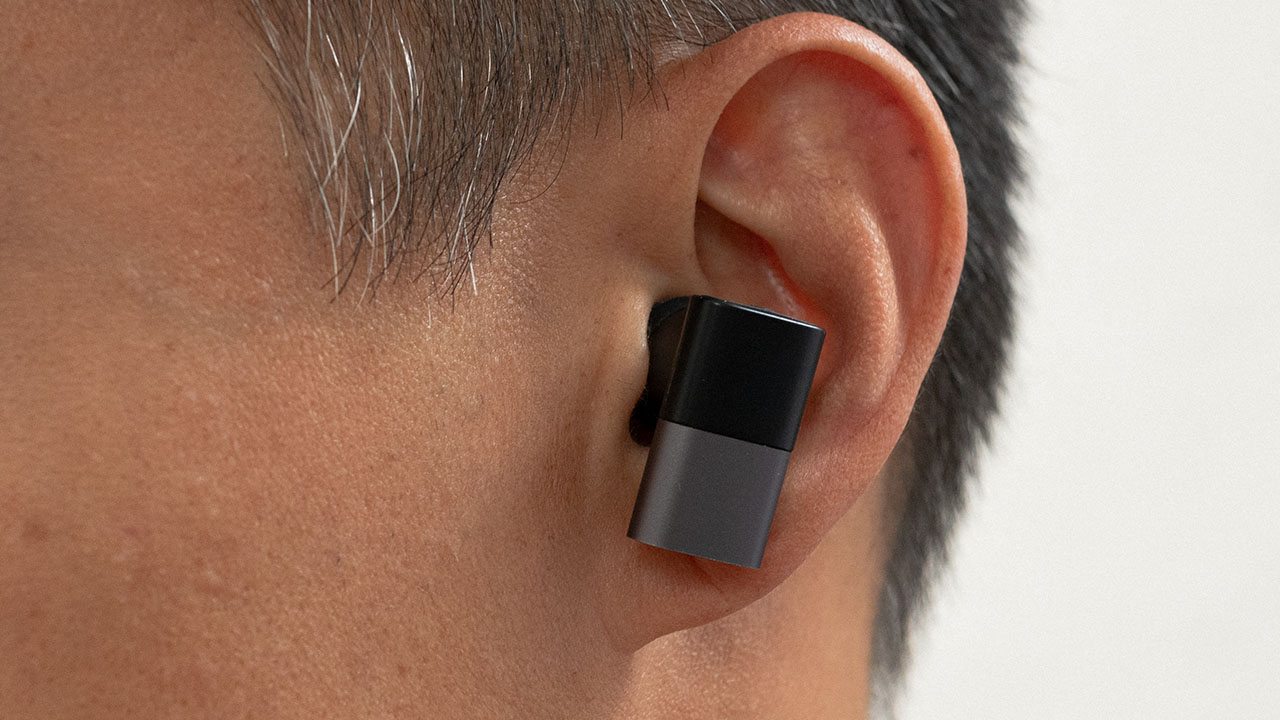 Our First Impressions: Minimalist and Straight-Forward

Here are my first impressions of the Status Between Pro earbuds!

The packaging is modern and simple, featuring a white sleeve, over a matte black box with a silver embossed logo.

The product itself is well compartmentalized, making clear what every single piece is for. There’s even a clever fold-open compartment for the extra ear fit wings.

I like how the charging case can sit upright, like a presentation box. However, it’s definitely bulky in your pocket, unlike round-edged Apple AirPod cases.

The top feels slightly flimsy, and you don’t get that satisfying full-bodied click when you shut it, so I initially couldn’t tell whether it had properly closed or not.

Simply put, the earbuds are not easy to get out of the case. There’s no instinctual way to grip them with your fingers and they’re magnetized to the box.

Here’s what works for me:

Regardless of what strategy works best for you, I’m afraid this part takes some finessing.

Immediately, I liked the simple and industrial design. The neck that connects the ear piece to the flat portion is pretty thick, but that’s what happens when you’re stuffing in-ear monitors with triple drivers.

If you’re like me, you might have some trouble figuring out how they sit in your ear. The best fit we found involves the buds coming in at an angle, while the body of the earpiece lays parallel to your ear.

Once the Between Pro are switched on, Bluetooth will immediately pick up on them. Pairing is straight-forward, and the earbuds automatically connect to the last device it was paired to.

As far as the sound quality, the most important part, it’s very clearly HD from the get-go. Just within the first 20 minutes of playing around with the Status Audio Between Pro, I’d say so far so good!

The biggest strength of the Between Pro is its balanced and expanded sound, making them effective for professional use and pleasant for amusement.

The audio is crystal clear with crisp treble, deep bass, and a perfect balance with all the elements in the sound profile.

If you like head-pounding, bloated bass, these may not be for you, but I’d still give them a shot. The Between Pro may not be bass-swollen in the way the Beats over-ear studio headphones are, but they don’t compromise on the deep-end either.

They provide an overall full and comprehensive audio experience.

According to their specs, the frequency response goes all the way down to 10Hz below what most humans can hear. Very few earbuds bother to go this far.

From an audio professional point of view, I found myself rewinding and relistening to files less than I do with my AirPods and Bose QuietComfort 15s.

From an everyday use point of view, you’ll definitely hear auditory details that you’ve never noticed before, even in very familiar songs. Moreover, the sound doesn’t get cloudy and messy even in the loudest settings.

I heard a new level of clarity in bass-heavy music, everything from electronic to The Cure’s Lovesong, and songs by husky voiced crooners like Sinatra and Martin. Meanwhile, my favorite early aughts pop music remained bright, with added dimension, minus the tinny quality.

This expanded soundscape comes from its triple drivers, which are usually found in high-end hi-fi speakers.

The bass, middle, and treble are each coming from their own individual, respective drivers, so none of them collide into each other. This really makes them the best, or at least most complex, earbuds when it comes to sound quality.

When the audio gets too complex, a single driver can’t cleanly recreate all the elements simultaneously, resulting in clouded sound.

Price-comparable dual-driver earbuds, the Soundcore Liberty 2 Pros for example, separate the bass from the treble, but lose the middle.

This isn’t even something I noticed until the Between Pro expanded my world. It’s this midrange capture that ensures you hear new things in even familiar songs!

Usually used for high-end speakers, Status loads the Between Pro with a chip equipped with this technology (located in the flat part that hangs from your ear).

The result is truly HD sound and faithful audio reproduction. In my experience, there’s literally zero video lag, whether I’m watching movies or participating in a video conference. I was even able to go a good 40 feet away from my source with the sound still intact.

When gaming, the sound direction is accurate, clear, and easy to pick up thanks to effective sound isolation. There’s the slightest, usually inconsequential, lag with first-person shooter games like Call of Duty though.

This is okay even for the heaviest gamer, but if you’re a tournament-participating professional, the Between Pro aren’t for you.

The call quality is also excellent. There are two mics on each bud, four in total. They team up, ensuring they grab your voice, instead of outside noises, resulting in a bright and clear sound quality.

Going back to its effective sound isolation, the silicon ear pieces and fit wings are excellent at blocking outside sounds.

They aren’t noise cancelling, but you certainly won’t be distracted by street commotion. The caveat here is you have to find the right size fit wings, and we’ll go more into that under Fit and Style.

Controls and Functions: A Tactile Alternative to Touch Controls

The buttons on the earbuds and case are intuitive and tactile. Let’s start by looking at the controls and functions of the earbuds then the charging case.

There’s an actual physical button on the top of each earbud. These buttons literally do everything, including play, plause, next track, previous track, voice assistance, answering and rejecting calls, and so on.

The tactile quality of the buttons are convenient and great for grip. I know some people aren’t fans of this because buttons aren’t as “slick” as touch controls.

In my experience though, touch controls can be too sensitive and slippery. I’ll often activate something random when I place my hands on them to simply take them off.

Status is all about resisting trends. If they can make it work and make it look sleek, they’ll go for it, but they don’t compromise function. I appreciate that.

You can use each earbud independently, which is great if you’re driving and taking a call. Unlike the Soundcore Liberty 2 Pros, as an example, the Between Pros aren’t app supported. They’re pretty no-frills in that sense.

Specs mention that they boast IPX-5 water resistance, which protects against sweat, rain, and splashes. I did go running in the rain in these, and they’re still with me today.

The charging case features a button on the bottom. This is the reset button. I’ve read about people using it as an effective universal restart troubleshoot solution, but I’ve not had to use it yet.

There’s no other obvious way to check the charge status at any given time. When it comes to knowing when to plug it in, I’m either feeling around in the dark or being given a 20% blinking red light, emergency style.

The earbuds’ 12-hour battery life beats the competition by double in several instances, and there’s 36 more hours in the charging case.

I will say that if you listen to your music constantly above 75% volume, the battery life is closer to 8 hours, which is still great.

As mentioned, since Status Audio is stuffing these earbuds with the capability of an actual speaker, they definitely had some finessing to do with the design.

However, they’re visually unlike anything in the market. They’re understated, solid-feeling, and feature zero branding. It’s an overall industrial and minimalist look, which I think satisfies techies and style-oriented folks.

I appreciate the snug fit of the silicone earpieces, which help with sound isolation and change the entire listening experience. For those that find fit wings that work, the Between Pro are definitely comfortable enough to wear all day!

One big con is that these simply won’t work for those with small ear canals. They come with three silicon fit wings, and the smallest aren’t actually that small.

Pros and Cons Of The Status Audio Between Pro

To summarize, here are the pros and cons of the Status Audio Between Pro earbuds!

Frequently Asked Questions About Between Pro

Is Between Pro good?

How good are Status headphones?

Status headphones are great for those who focus purely on sound quality and no-frills design and functions.

How much are the Status Audio Between Pro?

The Between Pro are $149 on their website. Check the latest price here.

We hope that was helpful!

What I like most about Status Audio is that they deliver on their promises. Even where they fall ever so slightly short, it has nothing to do with their focus on simple design and good sound.

Even if you’re not an audio professional or a sound nut, I’d say give these a try to see how dimensional earbud sound can actually be. If you’re an audiophile, the Between Pro earbuds really do impress.

This review is NOT sponsored. None of our reviews are ever sponsored. Our opinions are honest and based off actual experiences with the product. If you purchase using our links, we do earn a small percentage (at no extra cost to you). Your purchase helps support Effortless Gent, so thank you 🙂