Orient vs. Seiko: Which is better? Japanese Watchmaker Face-off

When you think of Japanese watchmaking, Orient and Seiko are likely two of the names that immediately come to mind. As two of the country’s heritage brands, it was a smart move on Seiko’s part to acquire Orient in 2009.

Orient still operates independently, its horological approach and brand identity unaffected by the merge. So even though they’re no longer market rivals, they often get measured against each other.

Today we’re comparing Orient vs Seiko. Both are known for craftsmanship and reasonable prices, so depending on what you’re in the market for, you may turn to Seiko for one style of watch and Orient for another. Let’s get to it.

Which is Better: Orient Or Seiko?

Both Seiko and Orient have different strengths. Let’s start with Orient!

For example, Orient’s in-house movement for the Ray II, Caliber F6922, is a 22-jewel movement with higher accuracy than the movement used by the Seiko SKX007 diver. Orient’s v4 Sun and Moon dress runs on their Caliber F6B24, which is more complicated and accurate than Seiko’s Caliber 4R35, found in their Presage Cocktail Time dress .

I recommend Orient for mid-range mechanical dress . After all, they’re the largest producer of mechanicals in Japan!

While Seiko is known for classic designs, Orient will often take fanciful approaches with their formal wear , generally speaking. Seiko is the dignified older brother, and Orient is the spirited younger brother, similar to the relationship between Rolex and Tudor.

Moving on to Seiko! Japan’s premier heritage brand is known for classic designs, a history of innovations and achievements, and an expansive range of offerings far wider than Orient’s.

While Orient does well for itself with mid-range mechanicals, Seiko hits high marks in every range thanks to their focused sublines.

Grand Seiko’s 9R spring drive movements are unique, accurate, and exquisite looking. Like a luxury Swiss , a spring drive is powered by a mainspring. However, Seiko incorporates a quartz oscillator for an average accuracy of ±1 second a month!

Seiko’s is one of few brands that have mastered both mechanical and quartz . They’re equipped with the expertise to combine the torque of a mechanical with the accuracy of an electronic quartz.

As far as the brand’s achievements, they introduced the quartz movement in 1969, solar power technology in 1977, and they invented the Seiko Kinetic movement which converts wrist movement into quartz electricity.

Moreover, Seiko has made Orient better.

Sure, modern Seikos don’t incorporate quirky complications like a moon phase as often as Orient does, but like the orange-dial SKX011J1 show that they still have fun with visuals.

Let’s compare some Seiko and Orient models in the categories of budget, sport, dress, and luxury .

This utilitarian is Orient’s budget answer to their mechanical aviators.

It’s an accurate quartz movement, which is rare for the brand. Despite being in the sub-100 category, it features cool details like the leather accents on the fabric strap, the demi-skeletal hands, and a 42mm gunmetal stainless steel case. 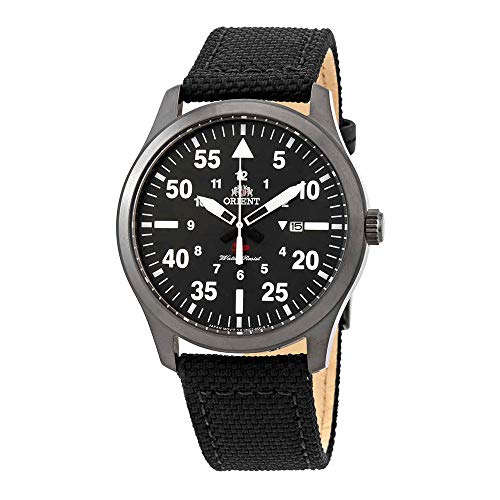 This is definitely the go-to Seiko 5 budget . It runs on Seiko’s legacy caliber, the 7S26 workhorse, an automatic movement with a day/date.

Style-wise the SNK805 is a robust and legible field , with a military-inspired green palette and canvas strap. At 37mm, it also most wrists. 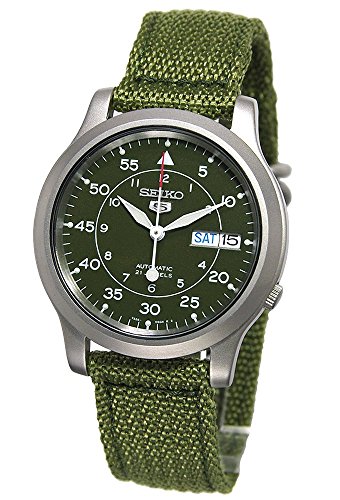 This watch eatures a stylish and durable green fabric strap that closes with a traditional buckle. The watch's green dial matches its strap and boasts easy-to-read Arabic hour and minute markers. The dial also features silver-toned hands and a date window at the three o'clock position.

Overall, the Orient flight is the sleeker option, which is unique for a field . As a sub-100 automatic, the Seiko SNK805 punches above its price-point when it comes to horological functions.

The Orient Ray II is considered one of the best Submariner homages, but is also a beloved classic on its own. It’s an effective tool with 200m of water resistance, 120-click unidirectional bezel, and a screw-down crown. 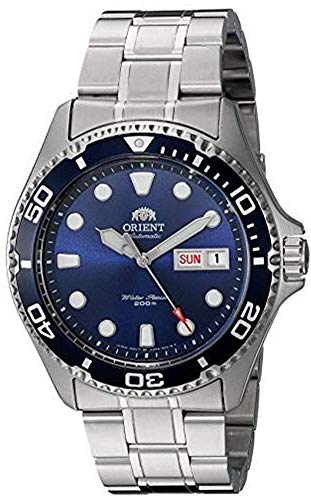 This diver is highly revered, garnering respect from even the snobbiest watch buyers, and is the closest to a Rolex Submariner for under $200.

As mentioned, Orient shines in the mid-range mechanical department, and the Ray II’s F6922 automatic caliber is hacking, hand-winding, and day/date equipped.

The SKX007J1 features all of the same diver functions as the Ray II. However, its crystal is Seiko’s proprietary Hardlex which is more scratch-resistant than the Ray II’s standard crystal.

Seiko’s Lumibrite is also much brighter. Most importantly, this is ISO-certified which means it passes more dive stress tests than the Ray II. 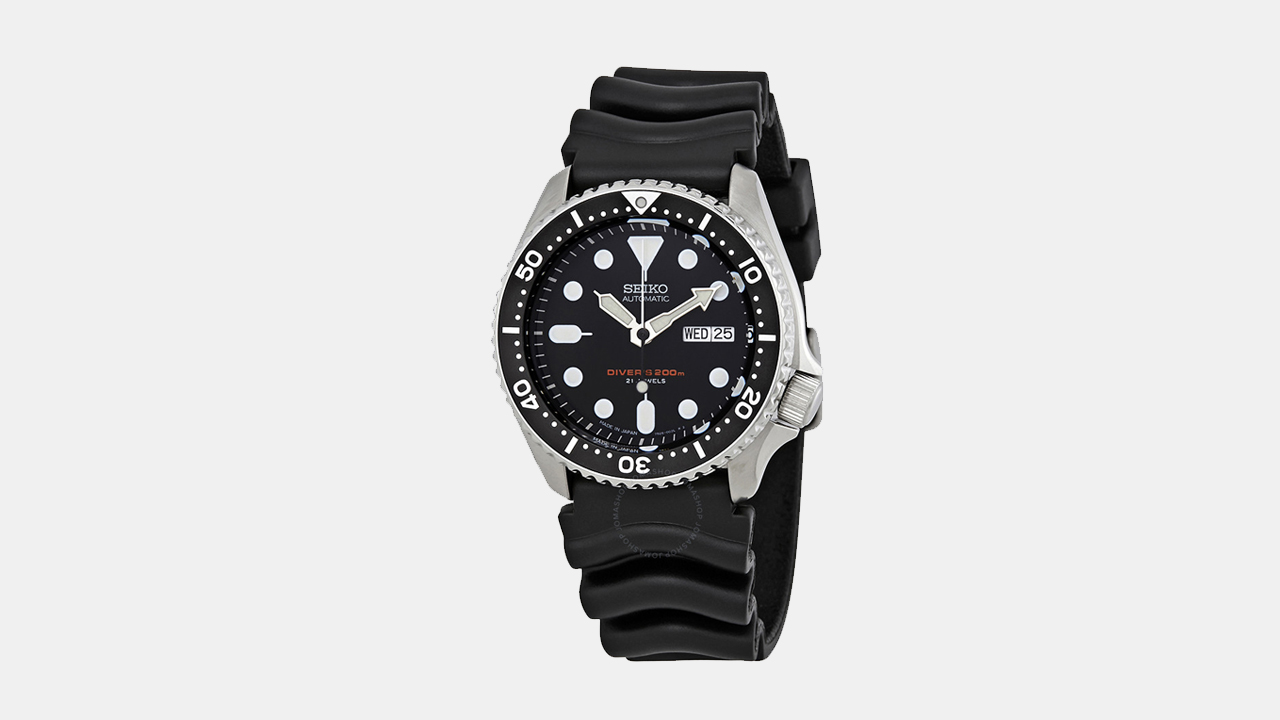 This watch is Seiko’s quintessential diver and its most popular, likely because it makes you look like a discerning collector!

The verdict here is that the SKX007J1 has a higher level of functionality on every front (and a higher price tag), except for the movement. The Ray II’s F6922 is more complex than the Seiko’s basic 7S36, and features hand-winding and hacking.

Also, at 43mm with a matte dial, the SKX007J1 has a slightly more tool-like aesthetic than the Ray II, which is 41.5mm with a beautiful sunburst dial.

The Bambino is considered by many to be Orient’s flagship dress , and this version is the most popular. The sunburst dial, domed crystal and minimalist markers have an antique yet timeless aesthetic. 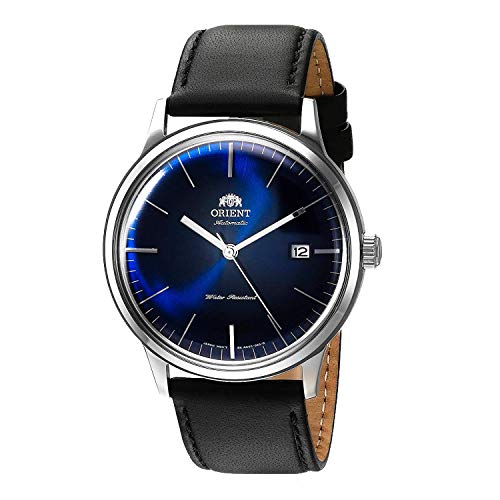 The dial is minimalist, with subtle complexities. The sunburst displays beautiful lightplay and is only noticeable depending on how the light hits it. There’s also a slight blurring effect on the sides of the domed crystal which gives the watch a different look at different angles.

It features gorgeous lightplay that makes the look different at every angle, and runs on the automatic and hacking F6722 caliber.

This has a similar look to the popular but elusive SARB watches, with a clean and classic cream dial and high-luster applied markers.

With a mix of light colors and high shine, this elegant is reminiscent of the Rolex Datejust. Its 23-jewel 4R35 movement is automatic, hacking, and hand-winding. 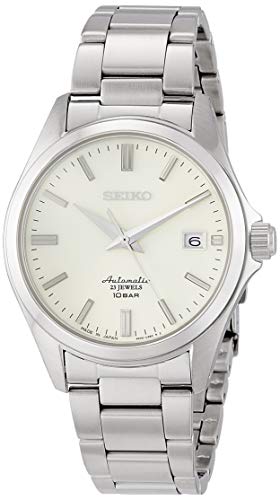 With the mix of light colors and high shine, this elegant watch is reminiscent of the Rolex Datejust. Its 23-jewel 4R35 movement is automatic, hacking, and hand-winding.

In conclusion, the Seiko Spirit is more understated than the Bambino, which many seek in a dress . However, the Bambino is a much loved and recognizable formal timepiece that combines antique ornateness with modern minimalism.

This unforgettable timepiece manages to be busy and elegant at the same time. Orient Star is one of the few lines that takes on the ambitious mechanical moon phase complication, and it’s definitely worth it. 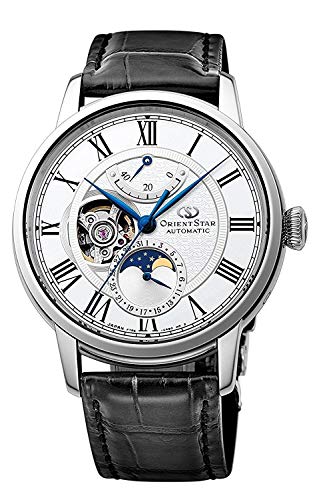 Orient Star is one of the few lines that take on the ambitious mechanical moon phase complication, and it’s definitely worth it. It looks fancy next to the stately Roman numerals, and the open heart which showcases the 22-jewel 46SF7 automatic movement.

It looks fancy next to the stately Roman numerals, and the open heart which showcases the 22-jewel 46SF7 automatic movement. The dial itself features a classy monogram and electric blue hands, all protected by a sapphire crystal.

This iconic stunner is made of high-intensity titanium, which means it’s stronger and lighter than stainless steel, and the dial features a textured pattern inspired by the snow on Japan’s Shinshi mountains. 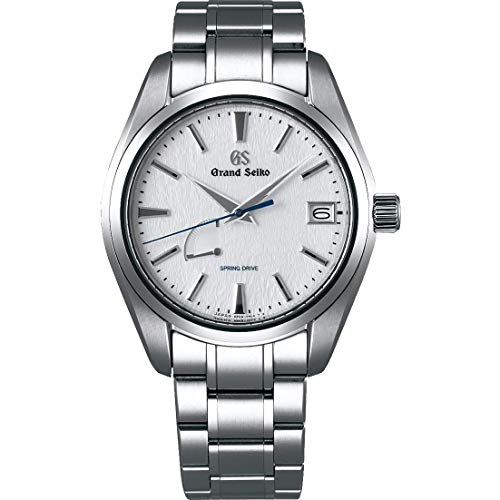 As horologically impressive and artistic as any Swiss hard hitter, Grand Seiko’s Four Seasons series are some of the most unique luxury timepieces out there. The Snowflake is hand-made, featuring a high-intensity titanium construction, and a stunning dial design inspired by the Japanese mountains. It runs on Seiko’s innovative spring drive caliber, which also has a 72-hour power reserve.

It runs on Grand Seiko’s innovative spring drive movement which, as we previously mentioned, brings the best of both the mechanical and quartz worlds. Hand-made and innovative, this is truly a piece of art.

Again, Seiko gives us understated elegance, while Orient serves up whimsical sophistication. Visually, choosing between these two is a matter of taste. Functionally, Grand Seiko watches are definitely at the top of the Japanese watchmaking game, offering timepieces that can rival the Swiss.

The Final Verdict: Orient Vs Seiko

If you’re going for tried-and-true classics or want a wide range to choose from, Seiko is your guy. Opt for Grand Seiko if you’re looking for a high-quality investment piece!

If you’re looking for a mid-range mechanical packed with functions or a beautiful yet fun dress , go the Orient route.

Which Orient and Seiko do you love? Do you prefer one brand over the other?

At the end of the day, it’s really a matter of preference. Both brands have so much to offer, especially now that they’re in the same family.