by Giuliano Caracciolo  |  in Accessories

This is a guest article from Giuliano over at Timeless Gent.

Most men view accessories as something to add to complete their look. While this is true, I feel accessories play a much more important role in men’s style.

Accessories give men the chance to show off their unique character. Which, at its essence, is what style is all about.

One of my favorite accessories for men during the colder months of the year is none other than the scarf.

Scarves have been around for roughly two thousand years, with historical ties to both ancient Rome and China.

Surprisingly, scarves originally served two purposes back in the day:

The scarf really made the transition from pure practicality to a style accessory in the 19th century. As so often is the case, this was mostly due to the public spotting contemporary celebrities sporting scarves and following suit.

Today, men most commonly use scarves as protection from the cold, or as a formal accessory to pair with a suit or tuxedo.

So what about men who live in warm areas (lucky!) or rarely dress in formal attire?

Thankfully the many different fabrics in which scarves are made from lend a versatility to the garment that allows it to be worn in a much wider variety of settings:

With the fleece of sheep as its source, wool scarves are the most warm and durable option you can get.

Keep in mind that wool scarves can be rather thick, making them not the most suitable to try new knots with. However, wearing a wool scarf in a climate that has harsh winters is a no-brainer.

A more luxurious form of wool, cashmere actually comes from the under hair of goats.

The absolute best thing about cashmere, in general, is that as it ages, it actually gets softer.

Cashmere is pretty versatile and looks good in any environment. However, keep in mind that there are many types (and qualities) of cashmere and they vastly differ in price, with some becoming quite expensive.

Mention silk and the first thought to probably crawl into the listener’s mind is luxury, and for good reason.

Pretty much anything that goes around the neck of a gentleman in men’s style that is considered top quality is probably made of silk.

Silk scarves are not the most practical as far as protecting you from the cold. Where silk scarves thrive is in formal settings. Pairing best with a full suit, blazer or just under an overcoat.

Cotton is a lightweight fabric not often associated with scarves. This makes a cotton scarf the definitive type for warmer weather climates.

Cotton varieties also tend to sport some more vibrant colors – a great way for the more trendy man to show off his character without being too tacky.

Four Ways to Wear a Scarf

The main reason scarves are such versatile accessories are the fact that there are many ways you can wear them.

Most of the knots I am going to describe here are fairly easy to recreate.

I suggest going in front of a mirror, follow the steps and practice until you can nail the routine. As an alternative, there are various videos on YouTube that can give you an interactive demonstration of how the knots work.

Now, on to some stylish ways to wear a scarf (diagrams c/o Real Men Real Style). 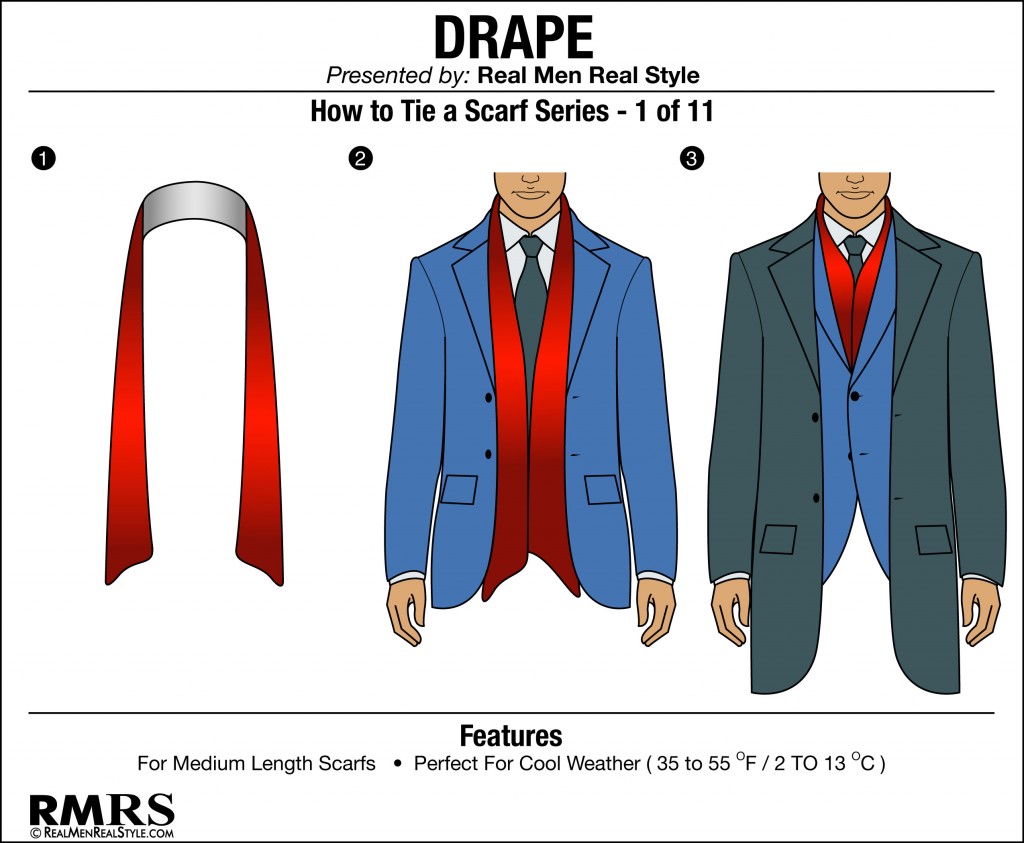 The drape is by far the easiest way to wear a scarf, as it actually requires no knot at all. Just like its name, you simply drape the scarf over the back of your neck and let it lay across your chest. The drape looks best when wearing a blazer or overcoat with the ends of the scarf tucked in nicely.

Wearing your scarf this way does little in protecting you from warmth so it’s not very practical. However, it is a great look that I like to incorporate when dressing up, especially in business environments. 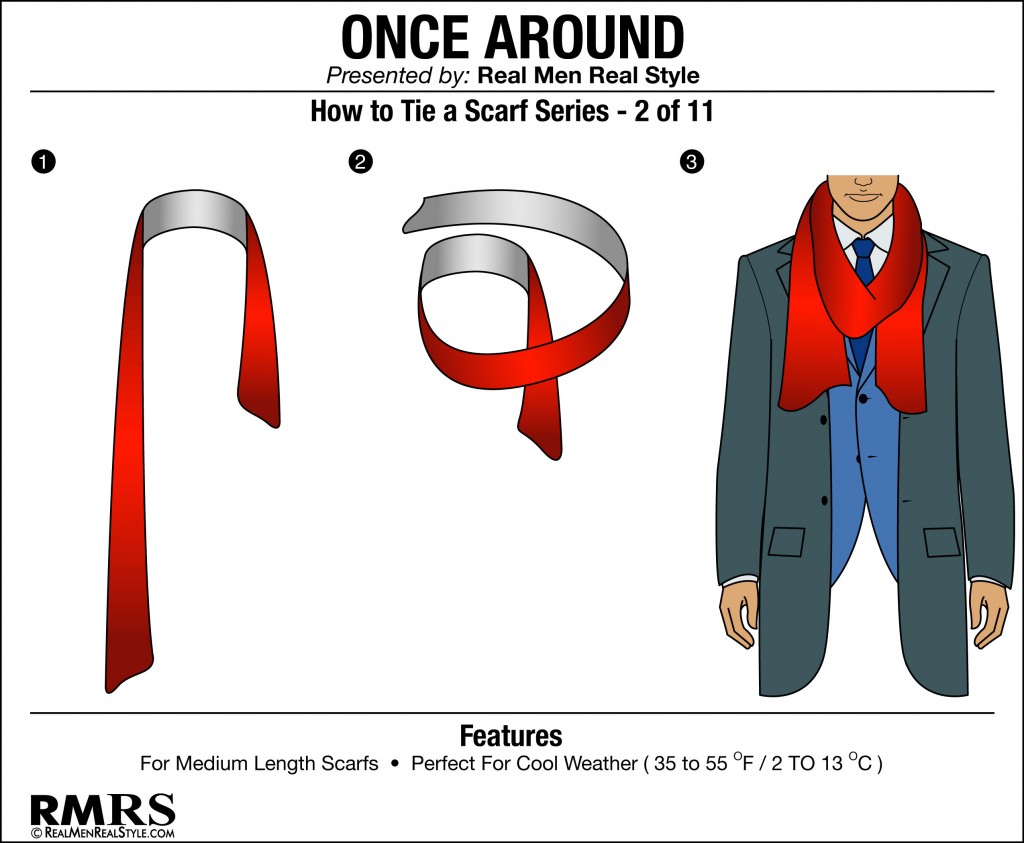 Here is another very simple way to wear a scarf, and one of my go-tos.

Wearing a scarf this way is best with one that has length. There is no restriction of the type of fabric to choose but cotton would be the most ideal.

Wearing over a cardigan, a light jacket or a sweater are all great ways to wear the once-around look. 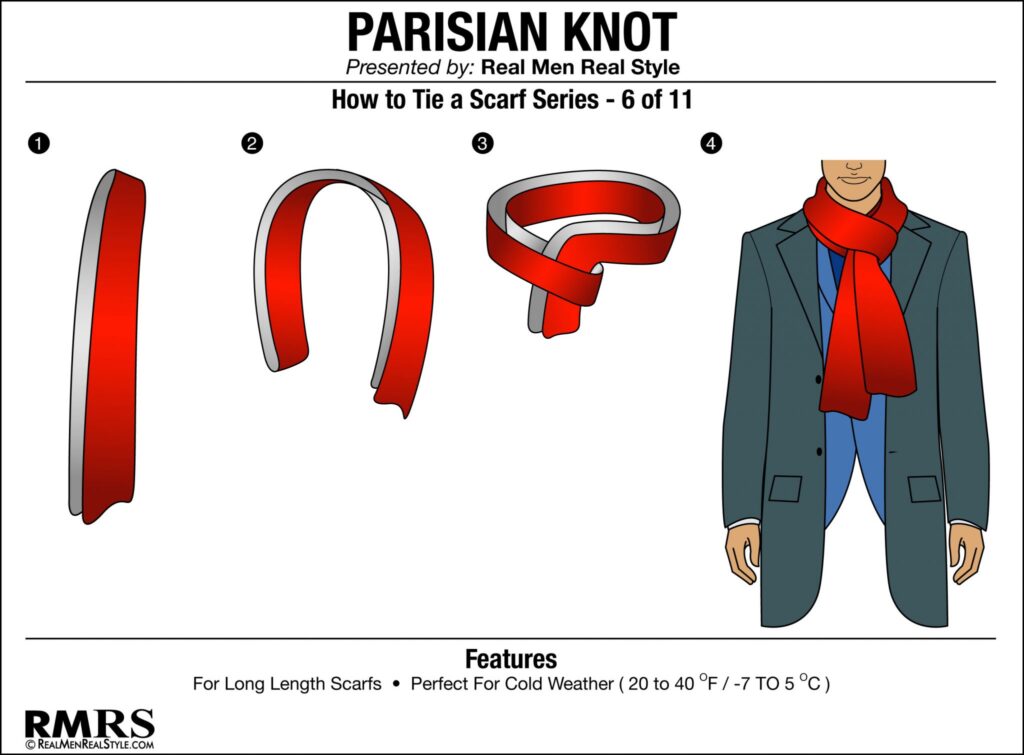 The first official “knot” on my list and the most used when out about in the winter months. I love the European knot for its excellent combination of simplicity and elegance.

Creating this knot is also easy. Simply fold the scarf evenly so that both ends meet. Drape the folded scarf over your neck and put the two ends through the loop created from the fold.

I wear this with pretty much all styles, from a suit to blue jeans and a grey sweater. It also looks great as an overlay or tucked into a jacket, a truly versatile way to wear a scarf. 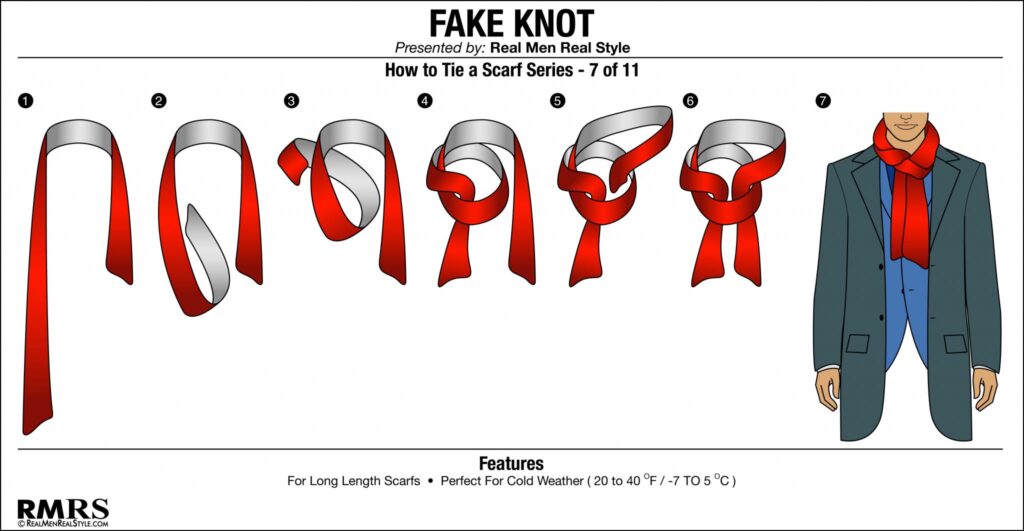 Not a look I wear often, but still one of my favorites: the Fake Knot.

The fake knot is, as its name applies, not really a knot at all.

This is the most complex on the list but still super simple to tie. First, you drape the scarf over your neck and have two-thirds of it hanging on one side and a third on the other.

Take the longer end, and simply make a knot without tightening it. All you then have to do then is to put the shorter end through the loop created from the knot, creating that “false” knot.

Scarves are a fantastic way for men to accessorize in the fall and winter months. Not just for the obvious fact that it can protect your neck from the cold but also for the way it compliments a man’s wardrobe overall.

What’s your favorite knot? One of these? Something else? Tell us below in the comments!